At the Munich Security Conference the Ukrainian opposition and the U.S. essentially agreed on a plan to force Viktor Yanukovich to capitulate. Arseniy Yatsenyuk told of this plan of action, which was worked out with the direct participation of Western representatives, after a meeting with U.S. Secretary of State John Kerry and EU officials. While the «Euromaidan» is shoring up its tents, showing that it is there for the long haul, the State Department has appointed a time by which the regime change operation in Ukraine is to be finished: March 24. That is how the message which appeared on the official site of the U.S. State Department on January 24 could be interpreted: 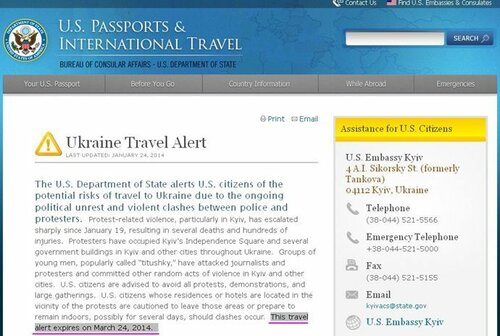 «Ukraine Travel Alert. The U.S. Department of State alerts U.S. citizens of the potential risks of travel to Ukraine due to the ongoing political unrest and violent clashes between police and protesters. Protest-related violence, particularly in Kyiv, has escalated sharply since January 19, resulting in several deaths and hundreds of injuries.  Protesters have occupied Kyiv’s Independence Square and several government buildings in Kyiv and other cities throughout Ukraine.  Groups of young men, popularly called “titushky,” have attacked journalists and protesters and committed other random acts of violence in Kyiv and other cities.  U.S. citizens are advised to avoid all protests, demonstrations, and large gatherings.  U.S. citizens whose residences or hotels are located in the vicinity of the protests are cautioned to leave those areas or prepare to remain indoors, possibly for several days, should clashes occur.  This travel alert expires on March 24, 2014».

The start of implementation of the regime change plan most likely will coincide with February 7. Two significant events are to occur on this date: the start of the Olympic Games in Sochi and the deadline on suspension of the cap on theU.S. state debt agreed upon by the President and the Congress.

Today, as six months ago, when the situation in Syria abruptly deteriorated and everyone was expecting the beginning of a military campaign against that country, the masters of the Federal Reserve dollar and the U.S. government once again face the same self-destructive dilemma: to default and declare America bankrupt or to raise the debt ceiling once again and further toughen austerity measures. On the international arena this dilemma is directly linked with the need to reevaluate the status and role of American currency.

The masters of the dollar are unable to resolve the problem which is making America’s life difficult. In recent years they have merely been postponing a solution, making do with initiating cataclysms to distract attention from the dramatic situation with America’s currency. Now a new flare-up in the problem has been postponed until February after something similar occurred last autumn amid the dramatic happenings which fastened the entire world’s attention to Syria (the drama was instigated by America’s allies among the Islamist terrorists who falsified a «chemical attack» in August 2013). A similar refocusing of the world media’s attention is occurring today, but this time the role of the main «distraction» is being played by the disturbances and pogroms on the streets of Kiev and other Ukrainian cities. 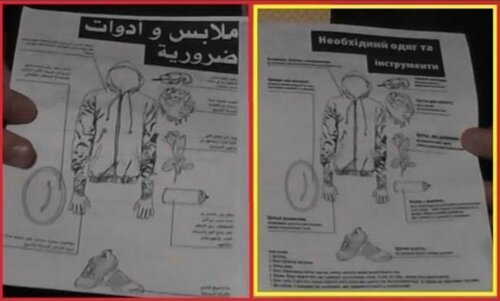 The problem of a U.S. default first became a major issue in 2008, soon after Moscow’s statement that Russia is setting a course toward economic integration of Eurasian countries. Then the Wall Street was able to distract the world’s attention by shifting it to the slaughter in South Ossetia started by their Georgian puppets on the day of the opening of the Olympics in Beijing and to what the world media called «the beginning of the global economic crisis».

The default of the «global superpower» and the collapse of the currency system and the dollar will most likely not take place immediately after February 7 either, despite the most acute financial and economic crisis since the time of the Great Depression and the astronomical proportions of the aggregate debt of the United States. The masters of the American currency have initiated a whole series of crises which could give the dollar its next reprieve.

The most «promising» crisis has been created around Ukraine, to whose shores the U.S. is already prepared to send its warships under the pretext of the Sochi Olympics. Thanks to the sensation surrounding the disturbances in Ukraine, key facts which testify to the acuteness of the problems facing Americans remain practically unnoticed in the world media. Such as information about the size of the drop in the real disposable income (RDI) of Americans since 1974 (the change is reflected in the following graph):

These events affect Europe as well. Even pro-American Polish politicians, such as former president of Poland A. Kwasniewski, who represents the European Parliament in Ukraine with regard to the Tymoshenko case, speak of this with alarm. «The situation in Ukraine,» says Kwasniewski, «could get completely out of the control of the authorities and the opposition and have extremely tragic consequences not only for Ukrainians, but for the European Union as well… The fact that innocent people are being killed in Ukraine could cause a wave of migration and economic problems… We truly are in danger of a great tragedy. I think that European diplomats, diplomats from neighboring countries and Poland should be very sensitive to these matters. We could end up in a spiral of events which we will no longer be able to stop..».

Besides the crisis in Ukraine, which is distracting the international public from the upcoming battle for the future of the dollar on Capitol Hill, another three «backup» crises are being prepared in Thailand, Egypt and Syria. On the eve of the Olympics, Damascus is supposed to report on the liquidation of its chemical weapons. The plan adopted in November provides for the weapons to be completely removed from the country by February 5. However, Syria is clearly lagging behind schedule. But both Damascus’s fulfillment (disarming before a potential aggressor) and non-fulfillment of its obligations with regard to chemical weapons give Washington a pretext to step up actions against Syria, Russia’s last Middle Eastern frontier. No wonder  that the U.S. attempted once again to talk with Syria in the language of ultimatums at the Munich Security Conference, and the radical Islamists from the Caucasus Emirate, who are fighting on the side of the Syrian rebels, are already prepared to act in Ukraine after the recent call for their confederates to «go on jihad» both in Syria and in the Northern Caucasus.