A well-known saying is “Give a man a gun and he’ll rob a bank. Give a man a bank and he’ll rob the world”. It is possible to argue that having observed the run up to America and allies’ invasion of Iraq in 2003 this saying can be adjusted to: “Give a man a media agency and he’ll not only rob the world, but he’ll also affirm that it is flat”. Thus, before George Bush Jr’s incursion on Iraqi territory the American corporate media simulacra machine went into overdrive. Publications such as The Weekly Standard and the New York Times gave so-called “neo-conservatives” lackeys likes Judith Miller column space to sell invented nonsense about “mobile weapons labs” and “yellowcake uranium” being in Saddam Hussein’s possession, as well as imaginary meetings in Prague involving Iraqi officials and anthrax. 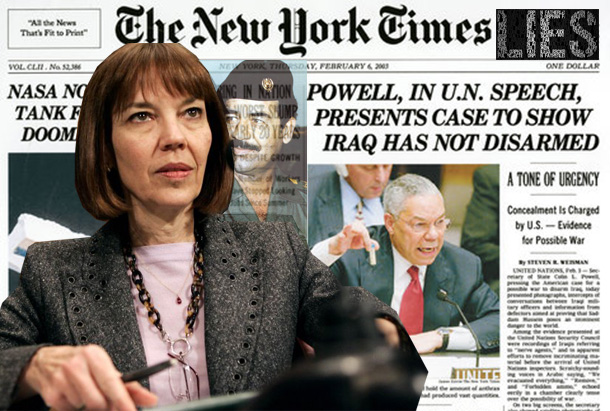 Fast forward a decade, during which the Israeli and Gulf lobbies waved their “US intervention is the only answer” magic wand, and what was the result? Over a million dead Iraqis and the beginning of the modern phase of what we see today – Sykes-Picot 2.0. Coincidentally, 2017 marks the 100 year anniversary of the Balfour Declaration…

And speaking of 2017 – has anything changed since Colin Powell forever embarrassed himself at the UNSC? Well, firstly, the same structure of simulacra exists: the CEOs of corporate US media are still connected to the US military industrial complex and war-hawk Senators. Secondly, lobbies such as AIPAC and the Atlantic Council that push for war still exist. And, last but not least, old habits of US lackeys do in fact die hard. Here, for example, a key advocate of US interference in Afghanistan in the 80’s today took money from a lobby to write this “Assad must go” junk.

In fact, the only thing that has changed is the signature under the calls for war. There are some recurring figures, of course, but in general a whole new pool was formed from the latest available “talent” concerning serving liberalism. One such “genius” is a Mr Charles Lister. He can be described as today’s equivalent of Judith Miller. They both first and foremost are lobbyists – the former for Israel, the latter for Qatar, they both were/are paid for their work (selling war), and they both have been exposed on more than one occasion for severely alarming incompetence.

An introduction to Charles Lister would be very beneficial for those who are hearing his name for the first time, but to save the author of these lines precious time, the reader is advised to watch his speeches on YouTube, look at his Twitter profile archives, read this contextual piece of analysis concerning his work, and to come to their own conclusion. But let’s state at a few facts:

These three facts should be enough to already formulate an image of who we are dealing with here. But there is one very important fact that is not officially documented by Charles nor by his peers, the reasons for which are understandable: to call a spade a spade – he is a lobbyist for Qatar-funded al-Qaeda affiliated terrorist organisations, such as Ahrar al-Sham. Of course, nor he himself or the US/Gulf state-funded institutes that he works for are going to so overtly proclaim this, which is why his job description states “Countering Terrorism project”.

Coming back to the topic of simulacra, here is where it becomes very evident that nothing has changed since the pre-Iraq invasion period. Please now watch the video below of Mr Lister’s latest performance with the Middle East Institute in the presence of Brett McGurk -Special Presidential Envoy for the Global Coalition to Counter ISIS at the U.S. Department of State (responsible for the US’ operations in Sy-raq).

Aside from McGurk, who at least admitted many things, especially that blindly handing out weapons to jihadists probably wasn’t the best strategy, the other notorious pro-war panelists simply spouted absolute garbage – for example, Lister impudently claims that Iran released a senior Al-Qaeda member, who subsequently travelled to Idlib… Let us just focus on one phrase spoken by Mr Lister at around 45:23:

“In the Syrian case, I speak to many Syrians in the al-Qaeda group and on its periphery…”

Yes, yes, you heard it correctly. Lister said, in the presence of America’s leading figure in “Counter terrorism” operations in the Levant, that he speaks to members of al-Qaeda. This isn’t grasping at straws, or trying to find sensation where there isn’t any. This is what Charles Lister himself said.

In 2002 if someone had been told that in 16 years think tanks in America would publicly declare that they directly communicate with Al-Qaeda almost as if it is just harmless friendly chatter – what would be the response? Well, on the one hand there would be both laughter and shock, but on the other, there wouldn’t be any surprise. Why? Because the same thing was going on back then too. The difference between the two periods is that Fourth Generation Warfare is very much the norm now, and thus the need for sophisticated simulacrum is greater than ever. The same “freedom fighters” in the 1980’s became “terrorists” in 2001, and in 2011 they became “moderate rebels”. Because of this cycle, Lister could post a selfie with Abu Mohammad al-Jolani (leader of al-Qaeda in Syria) and still remain a free man, meanwhile ordinary hard-working Arabs are harassed at airport security under the rule “guilty until proven innocent”.

Now, in 2017, the situation is such that America now calls the very groups they vetted and worked with in Syria as “terrorist organisations” at a time when they and their aforementioned proxies are defeated and there is a need to sweep it under the carpet again. It is possible to predict that the al-Qaeda cells, after being decimated but not erased in Sy-Raq, will be re-activated (re-financed by the West) to magically become “moderate” again exactly when the US finally works out how it can re-enter the Middle East after Moscow and Tehran frogmarched Washington to the exit.

If history repeats itself, then Charles Lister will go to jail for 12 weeks and will be hired by Fox News. In the meantime, how many more times does Bashar al-Assad need to repeat himself?