Civilisations come and go, but they are never destroyed completely. Much like the fundamentals of physics, atoms can never be “destroyed” – their existence is as infinite as the space in which they reside. The departure of one civilisation makes way for the birth of another one, built on the stems of the past. Whilst attempts can be made to uproot all remnants of the previous culture, religion, history, they often are in vain. For example, the modern United States of America has tried for all of its existence to remove the traces of slavery and extermination of the native population. These attempts have in fact only further plunged the knife into the near 250-year-old wound of shame, which has been exacerbated by the recent demolition of confederate monuments.

Thus, the only reason that we today know about these remnants of the past is because information about their existence rises to the surface like air inside a liquid. Today this communication of information is represented by digital simulacra powered by technology, which has progressed and “improved” over time; the way in which we communicate to others has become more and more a) truncated, and b) frequently transmitted. Whether it is 140 characters on Twitter or the rapid messaging on applications such as Whatsapp – we have all become ever so “connected” in an environment of globalisation. As a result, we have become submerged in a space that is saturated in information that has a lifespan of minutes rather than years.

It is for this reason that traditional news in the form of television and newspapers has ceded place to so-called “social media” in terms of audience and interaction. In 2015, the International Telecommunication Union estimated that about 3.2 billion people, or almost half the global population, would have the opportunity to use the Internet by the end of the year – about 2 billion of them would be from developing countries, including 89 million from the least developed countries. Of course, many newspapers and TV channels have tried to adapt to this shift, but in reality it is websites like Twitter and Facebook are now driving the information machine.

In the context of the post-modern era of “terror” (also known as “terrorism”), it is exactly this fact that distinguishes modern “fourth generation“ warfare from the versions of the past. After the US decimated Iraq and removed Saddam Hussein between 2003-2007, the way in which events from warzones are reported was forever changed. No longer could newspapers publish images of staged scenes such as US/NATO tanks toppling monuments to “dictators”, and at the same time achieve the same emotional effect that they became so used to artificially inducing. Thus, the media cooperations of America, France, Britain, Spain, Italy, Germany, etc began to sow their seeds in cyberspace, some even charging readers a subscription for the privilege. 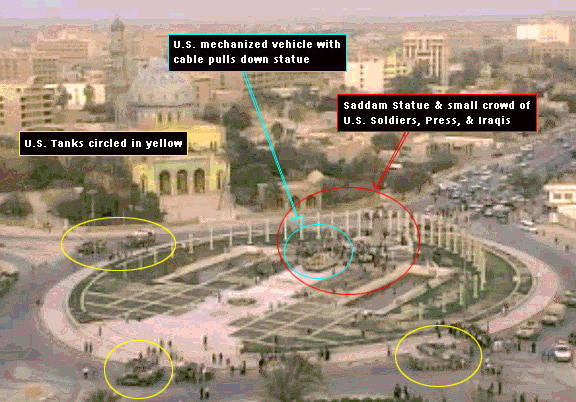 Contrary to popular belief, this new digital front has not only been the main theatre of war over the past 10 years, since the CIA’s “Twitter Revolution” in Egypt, but it has been the SOLE theatre. Now, at face value this statement can seem quite unsubstantiated, considering that there are military personnel on the ground in Yemen, Africa, Syria, Iraq, Afghanistan, Libya, Lebanon, Gaza and the West Bank, etc, and both civilians and soldiers/militants are being killed every single hour of every single day. But for these events to become known to the very tax payers who either knowingly or unknowingly pay for such loss of life, they have to pass through the digital simulacra algorithm known as the “news” (or “fake news”, if to use the new super-post-modern term). An example of such an algorithm could be:

In reality it is the OUTPUT of this algorithm that substitutes the actual event with an artificial one that actually never happened. Let’s use a real life example to illustrate this phenomenon. The screenshot below is from a Reuters article from October 11th, 2016: Inside the article the following claims are made: The first thing to note is that the cited “Syrian Observatory for Human Rights (SOHR)” is not actually based in Syria. In reality, it is a man with a laptop in a house outside London (related to Bellingcat?). In addition, the logo of the NGO features the green-white “Free Syrian Army”/”Syrian Revolution” flag. These facts already calls into question the validity of its reports. Secondly, no actual evidence of the claims is provided. It is just words, from an NGO that is not even inside the country that it is reporting “events” from. Photos, videos – nothing. So, in order to compare and contrast the validity of the article (output of the algorithm), there is a need to examine reports from the Russian side. The screenshot below is from a “Tass” article from October 13th, 2016: Inside the article there is a quote from the Head of the Main Operations Department of Russia’s General Staff Lieutenant-General Sergey Rudskoy, who says: In this statement Sergey Rudskoy simply states facts: Russia has technology that is capable of achieving high precision airstrikes (within 3 metres); Russia has the means to monitor the outcome of the said airstrikes; Russia has close cooperation with the Syrian Army on the ground, etc… So, putting the fundamentals of International Relations and geopolitics as a whole to one side, a question arises: Terabytes of proof exists (accessible to anyone with an Internet connection) that Russia has – and thus in theory is able to again with the same outcome – bombed terrorists (the definition of which is based on the UN’s own list of “terrorist organisations”) in Syria. But the side making the claim that Russia bombed civilians presents absolutely no proof besides some compiled text known as a “report”.

Thus, for the US, UK and EU this model of publishing just text “reports” would be nullified every time by the objective information combined with visual proof provided by Russia and allies.

Here is where the NGO known as the “White Helmets“ factors in. With their videos, the “Syrian opposition” (to call a spade a spade – al-Qaeda) is able to use their “reports” in addition to visual “proof” to try to combat Russia’s version of events. In fact, if it wasn’t for the “White Helmets”, the war in Syria would never have had the potential to escalate from the status of a “local conflict”. Something was needed if the Anglo-Saxon curators of the war were going to take advantage of the media of the Western world. And it is so simple: men dressed like do-good doctors rush to a “bombing scene”, pull out a “victim” from the “rubble”, and then “treat” the “wounds” of the “victim”. As a result, the real-life on the ground event of Russia bombing terrorists is substituted in cyberspace for the circus routine of the “White Helmets”. Because the consumers of the theatrical performance are sat thousands of miles away, their opportunity to verify the claims of pseudo-organisations like the SOHR firsthand is non-existent.

And this is why Britain recently decided to cherish their brainwashing brainchild the “White Helmets” like never before. Now a new exhibit can be found in London’s Imperial War Museum: a helmet of the “Syrian Civil Defense”. In other words, being totally stupefied by the barrage of Western-NGO propaganda, visitors to the museum can be filled with awe by the same beast that flew 3 planes into buildings in New York nearly two decades ago. “On 5 September 2017, the helmet of the martyr Thaer Hajj Saleh from the Syrian Civil Defense was displayed inside London’s Imperial War Museum, under the title “Syria.. The story of a struggle”. The volunteer Thaer Hajj Saleh was originally from Jisr al-Shughur, in Idlib’s countryside, and joined the Syrian Civil Defense after all of this family members were killed in a bombing launched by the regime forces. Thaer was killed by an airstrike on April 7th, 2017.

It is worth mentioning that the Syrian Civil Defense has received several awards including Sweden’s Alternative Nobel Prize Award in September 2016, the Human Rights and the Rule of Law Award by the end of 2016, and the Academy Award for Best Documentary Feature that shows the sacrifices done by the Civil Defense while rescuing civilians, according to Enab Baladi.”

In the post-modern reality real-world events are replaced by “news” disseminated via digital domain for consumption of the masses. The information collectively forms a hologram that “hovers” over theatres of military operations, and over time the layer acts as a proxy for the tangible place of events. In the future warfare will take place between different layers of simulacra, and the actual events on the ground will almost exist in a parallel universe, where the objective truth  will forever be trapped in the void that formed as a result of the transition from localisation to globalisation.

If a tree falls in a forest and no one is around to hear it, does it make a sound?