The U.N. and International Red Cross have just published their 64-page study, “Extreme Heat: Preparing for the Heatwaves of the Future”, and it contains maps showing which areas of this planet will probably be unlivably hot by 2070, and then by 2100. 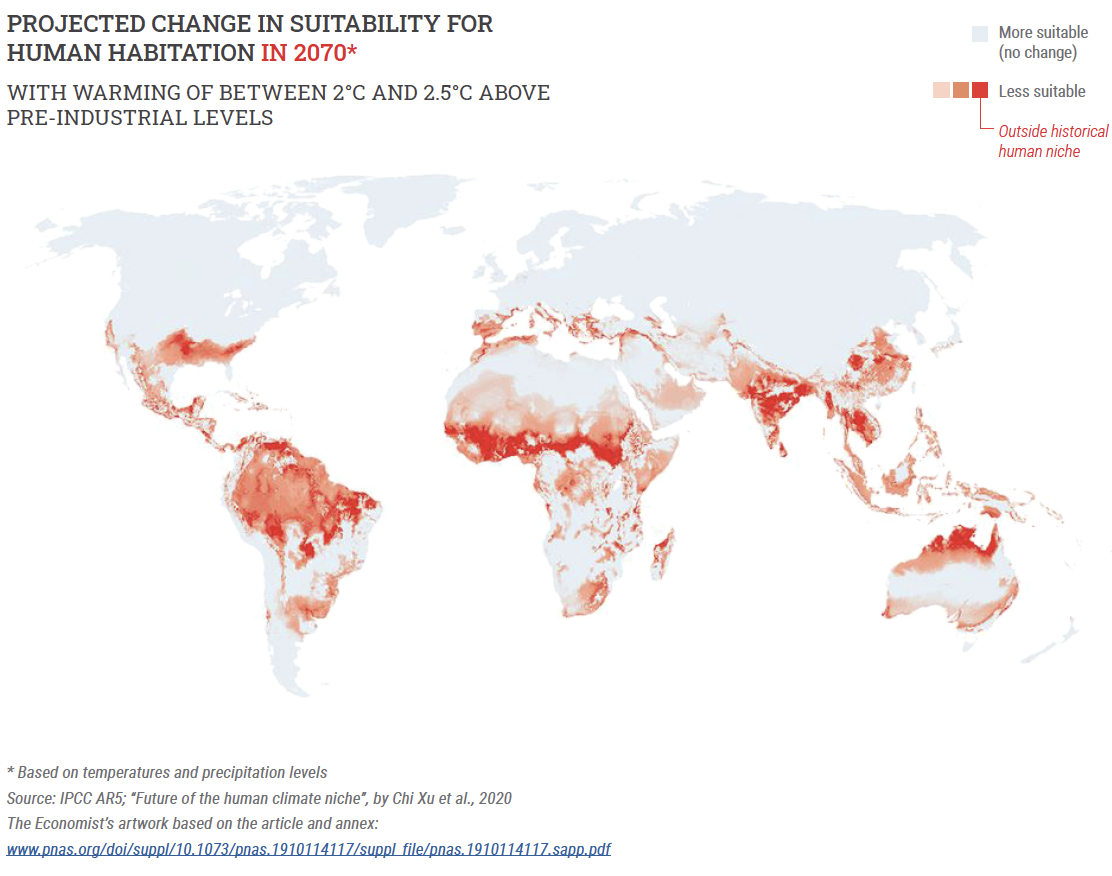 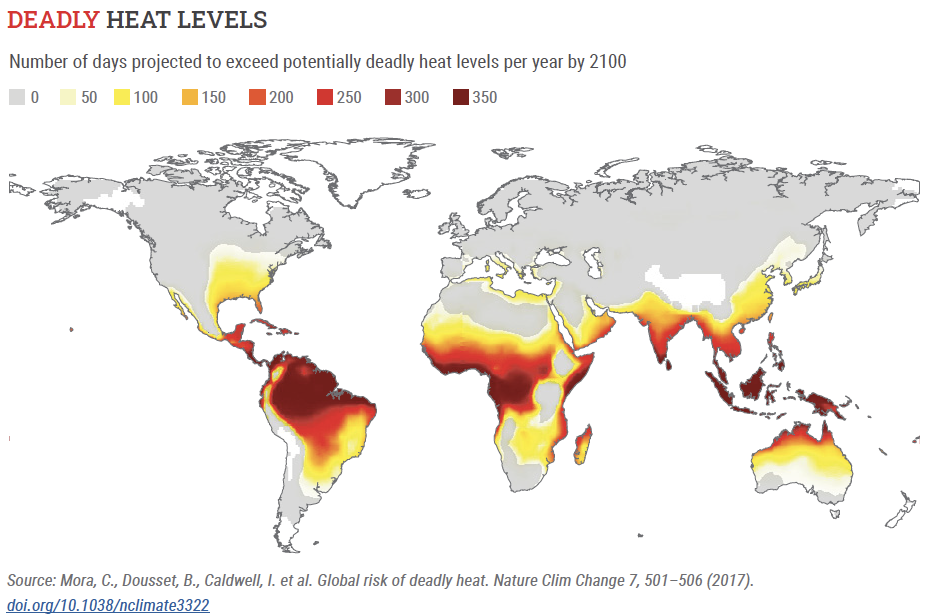 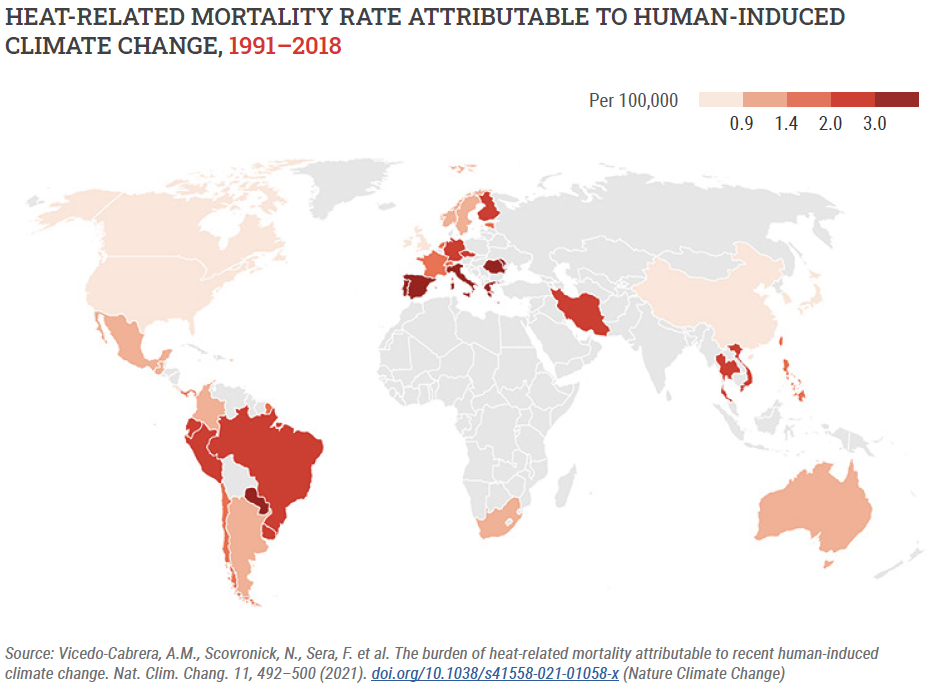 That map shows actually the total percentage of heat-related deaths. The dark red areas shown are Portugal, Spain, Italy, Romania, and Paraguay. The red areas shown are Germany, Finland, Iran, Thailand, Malaysia, Vietnam, Ecuador, Peru, and Brazil. However, this study indicates that “The burden of heat-related mortality attributable to recent human-induced climate change” was actually the highest in four nations that are all in Europe: Germany, Netherlands, Switzerland, and France. Those four countries had the highest global-warming-induced percentages of heat-related deaths. The brevity of the time-period examined, 18 years, suggests that different nations might show in the future, as having the worst results.

And here are the recent global trends (from the U.N-&-Red-Cross report), and the narrow likely-probability range of future results: 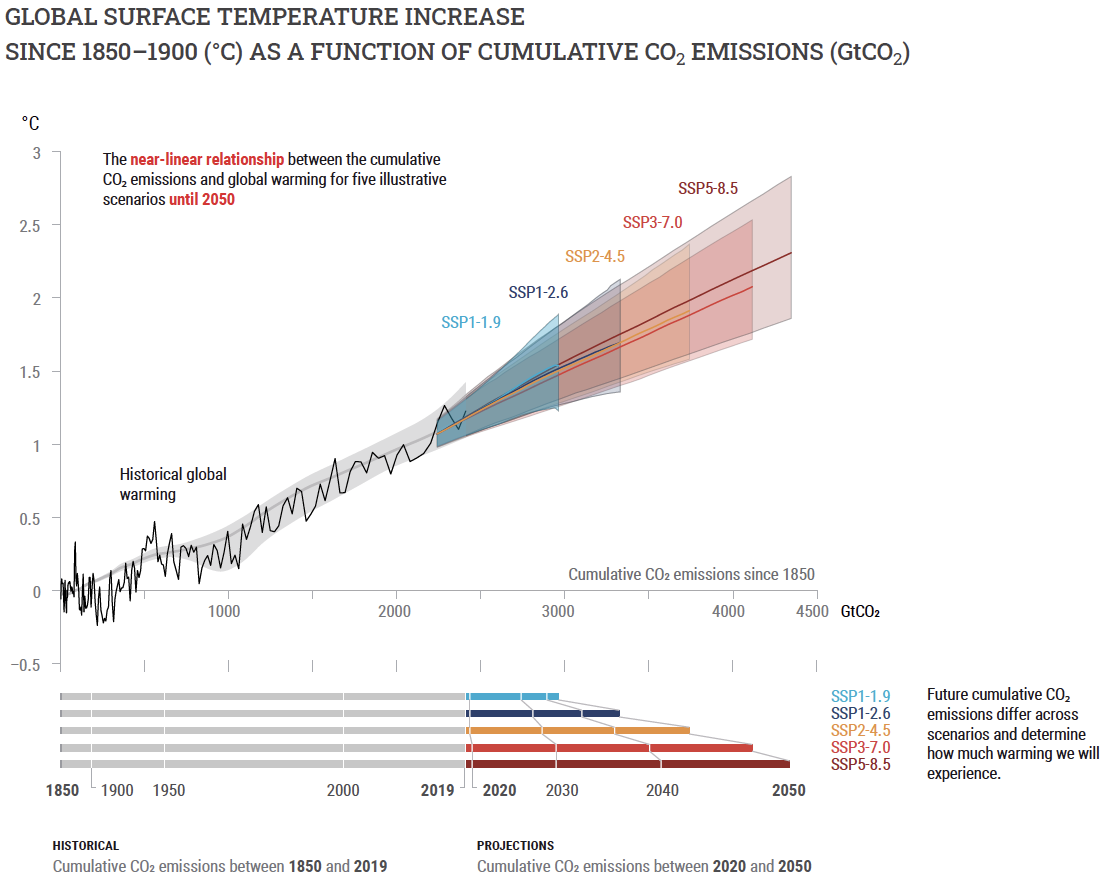 Even under the best of circumstances, global warming will continue (uness there will be a global nuclear war).

As I have previously noted, all of the policies that have been instituted, up till now, to prevent continued rise in global temperatures, have been designed to fail, but instead were designed to protect the market-values of fossil-fuel corporations’ equities (stocks) so as to pro-up those industries so that those investors will continue to be able to sell their shares at a profit; and, consequently, if there does still exist a way remaining to prevent this continued global temperature-rise (other than by a global nuclear war followed by a nuclear winter), that way would be to simply outlaw the purchase of stocks and bonds in all fossil-fuel-extracting corporations, which action by any major Government would promptly crash those corporations’ stocks and thereby redirect investments into R&D to develop and build-out thorium-based nuclear power production, which would replace all need for fossil fuels to serve as fuels, and which would therefore terminate further exploration, development, and burning, of such fuels, so as to bring to an end the usage of fossil-fuels as energy-sources. If global-burnout can still be prevented, that is the way it will be done. However, in order for that to happen, governments would need to be far less corrupt (far less beholden to the investor-class, and especially to billionaires) than they all have been.

Obviously, anyone having children under these circumstances is either uninformed about the current situation, or misinformed about it, or doesn’t much care about it, because the prospects for the future are bleak.

As the world gets ever-hotter, there will be less and less arable land, and more and more hunger and starvation, and all populations in the vicinity of the Equator will be trying to emigrate toward the pole, so as to be able to live, but the more that this happens, the more militarized and exclusionary the southern borders will become, in order not to become flooded with poor and desperate people.